Glaucus Atlanticus and their behaviour 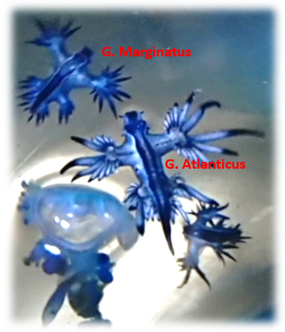 G. Atlanticus has many common names including the blue sea slug, blue sea dragon and the sea swallow. They are members of what is known as the ‘blue fleet’ consisting of all the nasty marine stingers including blue bottles and violet snails’ that beach goers’ fear in the summer months in Australia. This community of animals living afloat are commonly washed ashore between August and April on Australian East coasts from the Cape all the way down to Sydney.

G. Atlanticus is pelagic, living life on the ocean surface traveling where the wind and currents take them. This species of nudibranch are very different to their bottom dwelling relatives in the way they live; they are held a-float by an air pocket they maintain in their stomachs by gulping air. They also have the odd trait of spending their entire adult life with their ventral side up due to the placement of their air sack.

Physical description﻿;
A clear defining visual characteristic for G. Atlanticus is its cerate (finger like appendages) which are arranged in a single row at the end of its three pairs of appendages where as in G. Marginatus there are multiple rows which look more like clusters at the end of its appendages. Atlanticus also has a long cerate which looks like a tail that Marginatus lacks. It is usually also much larger than its cousin averaging 5cm while Marginatus reaches only 2cm on average. Colouration is also an easy identifying feature; the side toward the ocean surface (ventral side) has rich blue and silver colouration with a striking stripe down the middle of the body. The underside of the animals is a silvery grey which is used to camouflage from any predators from below. This countershading on both the dorsal and ventral sides as a great defense for these nudibranchs and is used with other members of the clade.

Glaucus feeding on Physalia
Ecology;
Habitat
Glaucus spend their entire lives in the open oceans and so not much is known about their habits or living conditions. It can be expected though that as they live in temperate waters it is likely they would be prone to violent storms.

These nudibranchs are at the will of the currents and wind and it is these forces that push them inland and onto coastal beaches throughout the year. The specimen studied for this page were collected at the Gold Coast Spit mid-May of 2015 but are found all throughout the tropics of Queensland during summer months, including coastal islands such as Herron Island.

It would be easy to assume that these tiny delicate little slugs would have significant bodily harm after being pushed around and tumbled in the shore break. This is not the case. During extreme aggravation Glaucus constrict themselves into a tight ball, release their air bubble so that they sink and escape the worst of the waves without major harm. Although they look delicate they very rarely experience dramatic damage and if they do they are able to regenerate most areas of the body.

Defense
Sea swallows are unique in the way they defend themselves. These sea slugs hunt other venomous pelagic organisms which drift nearby such as the violet snail (Janthina janthina), the blue button jellyfish (Porpita porpita) as well as blue bottles (Physalia utriculus) and then utilise their stinging cells as their own after eating them. The stolen stinging cells are known as kleptocnide and are transported through the gut without being digested in a still unknown mechanism to be stored in the cerate.

Cerate – are blood filled finger like appendages on the Glaucus found on the end of its appendages. As with other Aeolids, Glaucus cerate contain a duct connected to the digestive tract which terminates with a cnidosac at the very tip of the ‘finger’. This sac is where the nematocysts from the Physalia are stored for defence. Interestingly the cerate of Glaucus are not in fact blue as they appear but actually transparent; the cause of the dark blue colouration comes from the blue Physalia on which they feed.

Glaucus teeth
Locomotion
These slugs are at the mercy of winds and currents in the open ocean however they are able to swim by flapping their ‘arms’ in a coordinated manner to rotate themselves in a clockwise or anticlockwise direction. It would seem though from observation that they are unable to use their appendages or tail like structures to move in a purposeful or directional way and simply flap about until they bump into either a prospective mate or prey.

Hunting
Blue sea slugs use rhinophores (from the Greek words rhino meaning nose and phore meaning carrier) to essentially smell their way to their venomous prey in the open ocean. These smelling receptors send the information to the slugs’ brain, just as our olfactory system does for humans, and then they attempt to travel in the direction the scent is coming from. Once they have found their prey they latch on with razor sharp teeth and immediately begin to feed on the living organism. This would be a challenge of not for the design of their jaws and teeth which allow them to latch onto even the most gelatinous of victim. Their teeth are made of chiton which they also steal from one of their prey; the violet snail. All of their tiny teeth (denticles) are serrated and lock together like a zipper would once Atlanticus closes its jaws. 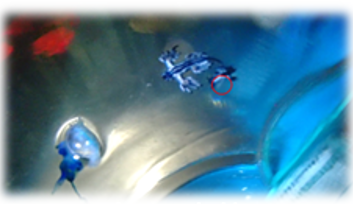 Glaucus have another unique personality trait, they are veracious predators and it has been theorised that they may in fact be cannibalistic. This behaviour will be explored in more detail to hopefully prove or disprove their response to interaction with another of the same genius.

The experiment to investigate these behaviours was very simple in design; place the two Glaucus in an enclosed environment with some food and observe the behaviour.

Prior to filming, the two species were kept separated in lightly filtered tanks with Physalia so that they could feed. The tanks had no artificial lighting and the water was supplied directly from where the specimen were collected; the Gold Coast Sea Way, The water was maintained at approximately 25 degrees using aquarium heaters. It was noted in the 24 hours before the experiment was conducted that Glaucus seem to be more active at night although they were still willing to feed during the day. For this reason the experiment was conducted in the evening hours around 6pm so that the subjects would hopefully be more active and light was used with a filter so as to not disturb the natural behaviours.

The hypothesis was that Glaucus were only cannibalistic if there was a shortage of their preferred food source, Physalia and thus if Physalia was available to Glaucus then there would be no aggression toward others of the same family.

This did not prove to be the case, it seems that Glaucus will eat anything it bumps into and has no preference over Physalia to its own kind. As can be seen in the video below, when Glaucus Marginatus comes into contact with Glaucus Atlanticus there are two behaviours that occur. The first shown is unexpected, with Marginatus exposing its penis upon contact with Atlanticus suggesting that these two species would be able to produce hybrid offspring if Atlanticus was willing to accept Marginatus. Marginatus continued this reproductive behaviour for nearly 5 minutes before reverting to a much more aggressive approach toward Atlanticus. It behaviour changed to that of a predator and Marginatus began to attack and eat Atlanticus. The attacking Marginatus focused on the tips of the cerate where the nematocysts are condensed, eating first the dark blue tips of its victim. The result of the 15 minute attack can be seen in the image to the right.

This is an interesting experimental outcome in itself as it is now confirmed that Glaucus are in fact cannibalistic. However, based on the unexpected behaviour seen during this experiment of Marginatus presenting its penis for copulation, it is proposed that experimentation into the hybridization of the two species could be investigated and their behaviour in open water further explored. 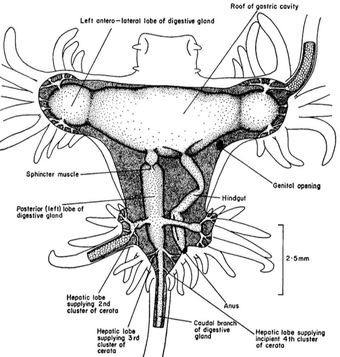 Glaucus have a relatively simple true gut, food travels from the mouth to the gastric cavity and then into the hind-gut before excreting at the anus. The mechanism in which these nudibranch use to distinguish between food and nematocysts is still unclear but it is known they travel from the gastric cavity to the hepatic lobe before being used as defence. Somewhere during this process the cells are enhanced and made more potent than they were when ingested, again this process is still unclear.

Unlike other nudibranchs, Glaucus mate with their ventral sides facing rather than the right sides. This is likely to avoid any nasty stings from their cerate and possibly so that they don’t get fed on by their mate during reproduction. They are similar to the nudibranch clade in the fact that they are hermaphroditic and oviparous. During mating the slugs act as both male and female producing both sperm and eggs and exchanging with one another.

The female reproductive organ on the left of the Glaucus (the genital opening) produces a string of up to 20 eggs. The penis of Glaucus compared to its body size is immense, sometimes stretching even longer than the body itself and is supported by what is known as the penis spine. As the sea swallow is pelagic there are some modifications to where the eggs are laid however. Most often they are laid into the mucus membrane of the slug and carried around or the string of eggs can be deposited on the carcass of their prey. Once gestation is complete the Glaucus locotrophic larvae become part of the planktonic community of the open ocean. 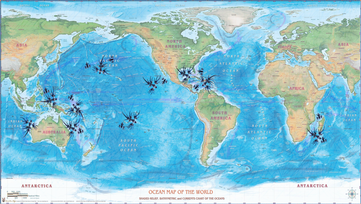 Glaucus inhabit temperate waters globally and drift on the currents of the ocean. As such it depends on what time of the year it is as to where they will be seen washed up on beaches; for example, Glaucus are found on the eastern coast of Australia between August and April when the winds blow predominantly on shore and there is a lot of storm activity in the surrounding oceans. They and the rest of the 'blue fleet' are most commonly seen in these months when there is a south easterly wind blowing

Conservation and threats;
This species has no commercial significance other than being an unwelcome visitor to beaches for swimmers. There is also very little know about their behaviours or lifestyles as they are pelagic and live most of their lives in open ocean where it is difficult to monitor / observe them.